Been a little while since I've had a chance to blog about a cook... This is one that I am really happy with; from the food, to the execution and the experience overall.

After an entire week without Egging anything due to a heavy work load and heavy rain just about every evening, I was itching to get something on the Egg this weekend. Talking it over with my wife, I wanted to try a leg of lamb for the first time. Anyway, we compromised and settled on a prime rib roast. Figured I would run up to Shady Maple first thing Saturday morning at pick one up.

Up at Shady Maple, the Meat Dept was busy so I had to take a number and I was still about 8th in line. While waiting for my number to be called, I checked out the cases to see if they had any bone in rib roasts out, they didn't. Finally my number came up and I told the guy what I was looking for. He asked me how big of a roast was I looking for; I said, "give me 4 ribs". I also asked them to bone it out; basically cutting the ribs just about all the way off and then tying the roast so it is in a more uniform shape for even cooking and easier carving. The guy gave me a slightly funny look and walked away with my order form for the butcher.

After about 15min my name was called and as I approached the counter, I saw the guy look my way holding the roast. Uh oh... What was I thinking? For some reason, figured there are three of us, so 1 rib each with a leftover. Not too big right? Wrong... really wrong. The guy hands me my roast like a nurse handing over a healthy hefty newborn. The roast was just under 9.5lbs! As I wheeled my newly delivered roast over to the produce section to get the rest of the stuff I needed for dinner; I figured I had better get on the phone quick, our simple dinner for the 3 of us had better get a few guests.

Luckily, once the grandparents heard of my problem of "too much prime rib", they were only too eager to help out.

After a little research on the Big Green Egg Forum I decided to cook the beast raised direct between 220 and 250 grid temp (not dome temp) until the internal temp was at 130. Given the size of the roast, and the cooking temp, I could expect to see a temperature rise of 5 to 8 degrees while it rested on the cutting board before carving, figured this in for my finish of rare to medium rare. For sides, I made some mushrooms, sauteed asparagus, and twice baked potatoes based on the recipe in the Big Green Egg Cookbook.

Here is the roast. You can see on the left where they sliced away the ribs almost all the way through before tying into a more uniform shape. I made sure and stuffed some of my seasonings down into the cut as well when I prepped it for the Egg. 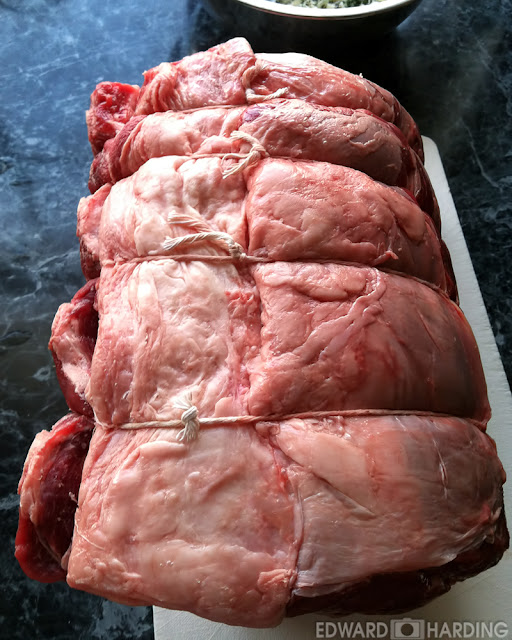 The plan was to get the potatoes cooked for the first part of the recipe and then get the roast on. The mushrooms and asparagus were done on the (please forgive me) stove.

Here are the potatoes after an hour or so on the Egg direct at about 400. They were rubbed with olive oil, seasoned with sea salt, and wrapped in foil. I also poked them several times with a fork before cooking them. 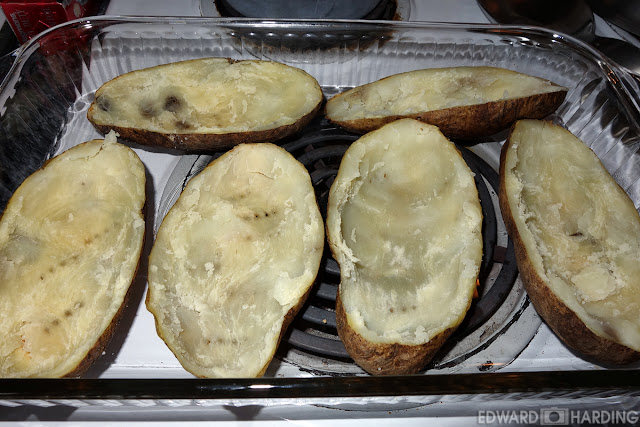 I scooped out the insides and made the filling. The filling has butter, Cheddar cheese, heavy cream, some BBQ rub, green onions, and salt & pepper. Here is mixing up in the Kitchen Aid. 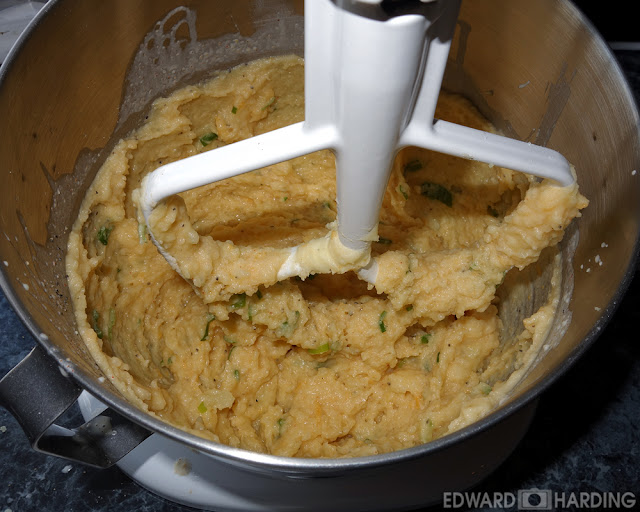 As the Egg got stabilized at the temp for the roast, I finished prepping the potatoes and started on the roast. Here the potatoes are stuffed and covered with some more cheese. I'll finish these on the Egg once the roast is off and resting in a few hours. 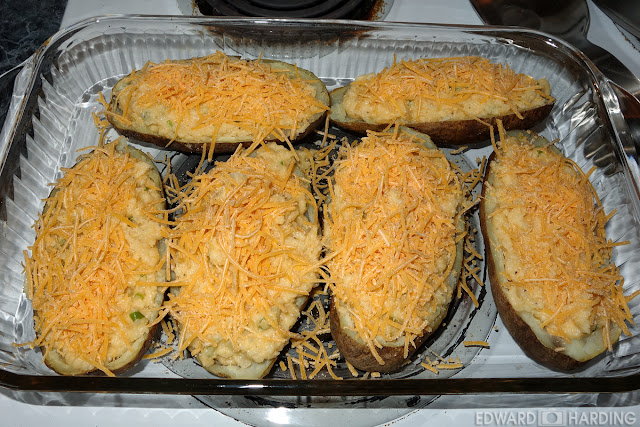 Here is my normal spice mix when doing beef roasts... Fresh chopped garlic, fresh chopped rosemary, course black pepper, and sea salt. I don't measure, just go by feel depending on how big the piece of meat is... Mix in some olive oil and create a paste for coating the roast. 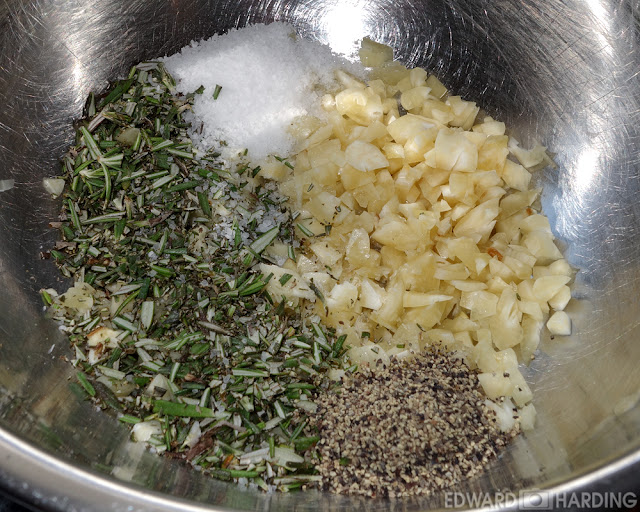 And here the roast is rubbed down and ready for the Egg. When doing Prime Rib roasts (or steaks in general) I don't add any smoke wood, I don't want to take anything away from or overpower the taste of the beef. 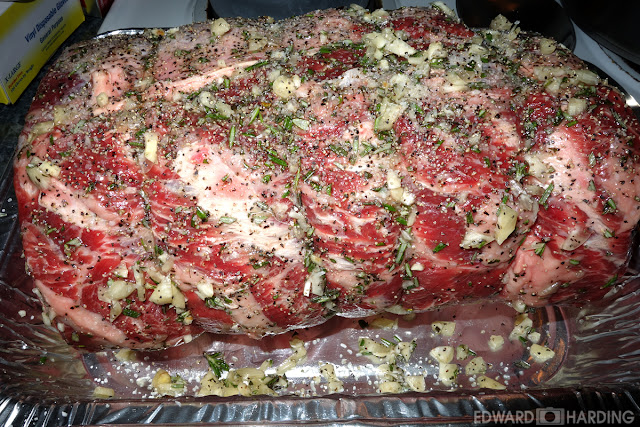 Once the Egg was nice and stable with a grid temp of about 240, I put the roast on and stuck the meat probe of my Maverick remote thermometer into the end of it and set my alarms. The Maverick is great, let's me go back into the house and work on other things if I have to while letting me know what the Egg and roast are up to.

Dinner was planned for 6:30-7:00, and the roast went on at around 3:15PM. I cleaned up the kitchen and then around 4:30 started the mushrooms. I wanted to cook them down slowly so the juice would make a nice sauce to go with the beef and potatoes. These are small sliced portabellas. I start with about a 1/4 stick of butter, and a big spoonful of minced garlic. Once the butter is mostly melted, I add the mushrooms and stir it around. I then add about a cup(?) of Cabernet Sauvignon. I turned the heat to low and just let them simmer, stirring occasionally. I added another 1/4 stick of butter after a while along with some salt and pepper. 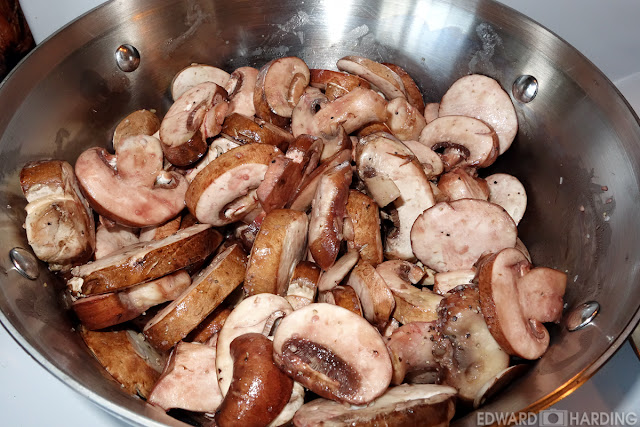 Here are the finished mushrooms after about an hour and half... they turned out really well and got thumbs up from everyone. 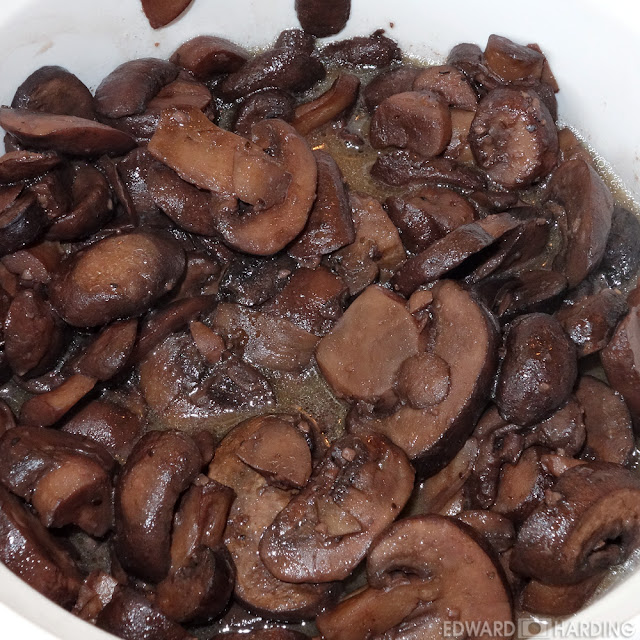 After about 3 or so hours, the roast was ready to come off the Egg and rest for a while. Here it is just before I took it off, the IT was 130. 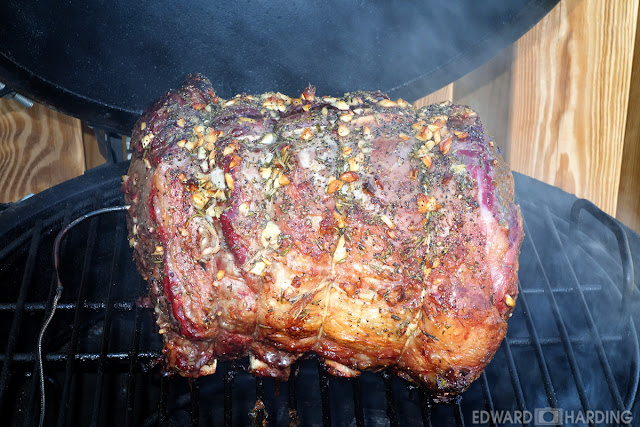 While the beef rested on the cutting board, I put the potatoes on the Egg to bake and get the cheese on top melted. After about a 25min rest I started to carve the roast. The meat was supper tender and juicy as you can see. And I managed to get the finish basically correct, I nice medium rare to medium. 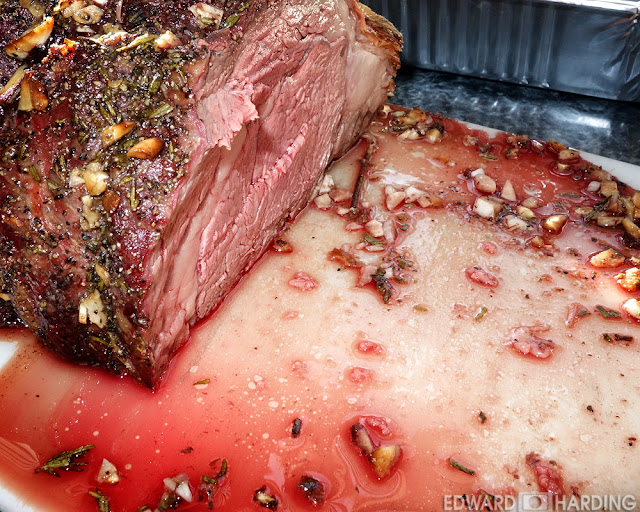 Here it is plated up with the potatoes, mushrooms, and the simple sauteed asparagus. We enjoy a nice Cabernet Sauvignon with dinner; a 2011 from Fat Bastard. It was nice and dry with a smooth finish and it complimented the meal well. 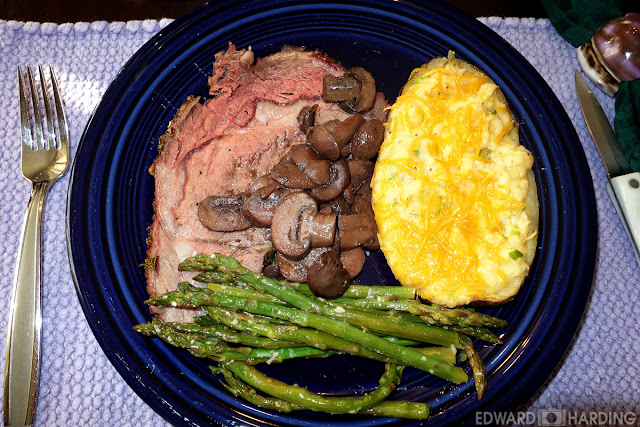 The grandparents loved it and we were happy to have them over...

The Egg of course showed once again why it's the best cooker period... This is a fairly simple cook, just on a large scale. Don't be afraid to try one of these on your cooker of choice. As long as you pay attention to the temperatures, it should turn out fine.

Let me know what you think. I'd love to hear from you if you have any questions or can relate your own cooking adventures.

Have a happy and safe 4th of July!

Thanks,
Edward
Posted by Edward Harding at 9:26 AM